What makes a player great? Is it talent? Trophies? Breaking records? I think it can vary between all of the afore-mentioned, but the case I’d like to look at today is that of a certain Carlos Tevez.

It’s not hard to name excellent Argentinian forwards, is it? You can probably name hundreds off the top of your head right now. Would Carlos Tevez be on your list, though? See, the curious thing is that he wasn’t an automatic choice on my list, but that’s not because he lacks ability, and I’d like to think that my memory is good enough to recall his name naturally – if it fits. The names that initially came to my mind were Crespo, Batistuta, Di Stefano, Maradona, and Messi, although I hesitate to name Messi in any category entitled “forwards” because I still class him as a midfielder of sorts.

So why isn’t Carlos Tevez a name that comes to mind? The fact is that wherever he’s been, he’s not simply been “ok”; he’s been simply outstanding. How many players can claim such? Generally speaking, most great players have excellent spells for the majority of their career, but not the entirety of it. With Tevez, I genuinely think that he was superb in every single season he played at every club. Left foot, right foot, intelligent, good ball control, great finisher, powerful – the list goes on. All he lacked was a bit of height, and that didn’t stop him from wreaking havoc in every league he played in.

I’m an avid Manchester United fan, so I can’t say I’m particularly enamoured to Carlos Tevez after the disappointing way in which he left the club. It wasn’t the fact that he left, or even that he moved to Manchester City that bothered me; it was his lies. He claimed he wasn’t offered a new contract etc., but he was. I’d have had more respect for him if he turned around to United and said “I’ve loved my time here, but I want to earn more money, so that’s what I’m going to go and do at City”. It’s as if he doesn’t want people to see him as a mercenary, but what else could he be seen as? Every transfer (until his return to Boca Juniors) that he’s ever made has been about him earning more money. 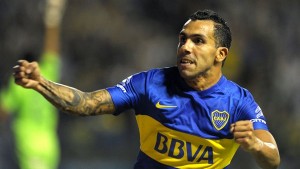 Initially, I had respect for Tevez’s love for his boyhood club, Boca Juniors, even when he insisted that he’d leave United when he was 28 to return to them. It was such a wrench to lose him when he was part of one of the most dynamic United forward lines that have existed in the past fifteen years or so, but I accepted it because he had his morals. However, that respect quickly dissipated when he decided he wanted to move on from them once again this summer, to join another former club – Corinthians, who are widely acknowledged to be the wealthiest club in South America (although no deal has officially been agreed as of yet). Can you spot the trend here? I can! I don’t see there being any shame in being motivated by money, but if that is the case, why hide it? That’s what I don’t understand. In my opinion, it’s his deception that stops him from being great in the eyes of most people, but that in itself is a tad harsh on him, isn’t it? After all, I’d estimate that most footballers are deceptive for a multitude of reasons; it’s just that it’s very easy to see his, and thus it’s easier to judge him for it.

Looking at him as a footballer, though, he really was fantastic. He scored amazing goals, and plenty of them, too. West Ham United, Manchester United, Manchester City, and Juventus in particular have plenty to thank him for over the years, even if he’s left the respective clubs in a bitter way, and I guess I’d just like people to remember him for the excellent forward that he was, and not for his name to disappear in the history books purely because he didn’t have a particularly long spell at any club.

"Are you gonna bark all day, little doggy, or are you gonna bite?" –– Ian is our expert tipster, with over a decade of experience analysing and betting on football