In troubling times with no sport, one would be forgiven for looking back on the past with a nostalgic sense of wonder. Historic Newspapers’ bespoke football books don’t just make it possible to view the past. You can explore it.

Each book is hand bound with reprints of articles documenting your team’s most historic games. Coverage dates back to 1900, and with colour coverage from 2006 onward, supporters can truly delve into their team’s history through first-hand accounts and rare photos of cup triumphs, promotions, and thrilling victories.

Looking back on articles and photos from famous games, there’s so much that stands out, and not just the eighties haircuts. 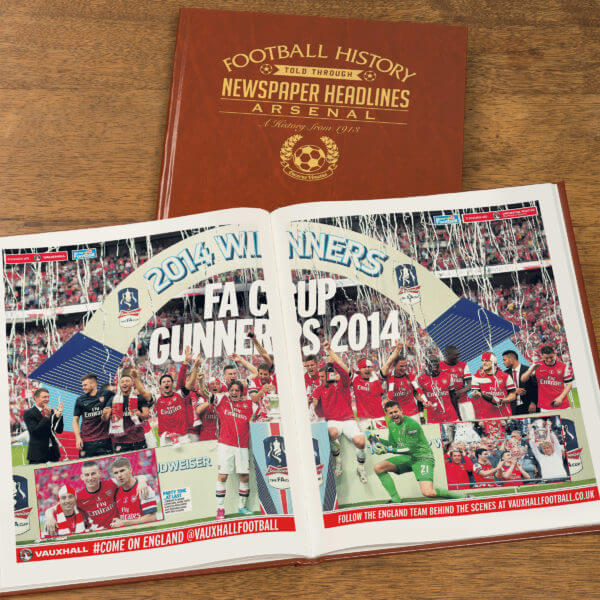 The “European Kop Final” of ‘05 as it was first recorded in the papers before it became famously known as The Miracle of Istanbul, is described as “the greatest football story ever told” and the Liverpool book indeed comes with stunning full page, full colour pictorial sections documenting this historic European night and many others.

Ask most football fans what they’d consider as the best night in Europe for a British club and they’d point to that night in Istanbul, but Historic Newspapers have archives dating back to the early 1900s, giving fans the chance to relive other historic nights such as Rangers’ unlikely European Cup win of ‘72, otherwise described as “The Bloody Battle of Barcelona” – one of my personal favourite headlines.

The perfect gift for a Father’s/Mother’s Day, birthday, or Christmas, you can also personalise the book by gold embossing the recipient’s name on the leather cover, and add a special message on the title page.

Historic Newspapers have football history books for 61 major British clubs, as well as a pictorial edition of the 1966 World Cup.

Historic Newspapers are based in Hertfordshire and are proud to own the largest private newspaper archive in the UK.