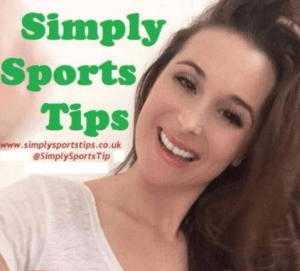 I am so happy to be sharing an interview that we conducted with Becca Stenson recently. Becca is a football tipster over at Simply Sports Tips [Toby Note: Sadly this site has since went away] and tweets her tips over @simplysportstip. Becca delivers high quality tips and given we posted recently about a lack of female football bettors we thought it would be great to her get perspective on things!

Can you tell our readers a little bit about yourself

My name is Rebecca Stenson (Becca to you!) I live and work in Birmingham. My “day job” is a freelance MAC consultant, my week is mainly made up of Wedding appointments so I could be working morning, afternoon or evening. I enjoy managing my own schedule! Apart from that I’m either at the gym, or out somewhere to eat. Those 2 things cancel each other out, right?

I also enjoy a bet, and have my own Twitter page  and my website [Toby Note: Sadly defunct].

Which teams do you support?

The team I have watched live most is Walsall. Got to support the underdog! Even went to Wembley in 2015 but that didn’t end well!

My cousin and one of my best friends is a West Ham supporter, following on from my Uncle. So I have a soft spot for them and have been to Upton Park a few times when in London, and away at Villa Park too. However, not a Hammer myself. I’ll stop sitting on the fence…

Put me down as an official Walsall supporter! Someone has to!

When did you get into football betting?

I actually got into betting when I went with some friends to the Premier League Darts in Birmingham! I believe it was 2013. It was a few years back anyway – when I knew a lot less than I do now. (Not saying that’s definitely a bad thing!) Anyway, a friend of mine advised that I do a bet on the Darts. I think he felt that it would be something to keep me a little entertained whilst they knocked back the beers! There was football on that night too.

Due to my beginners luck I remember what happened next clearly. One by one the Darts bets came in, which had me constantly checking my phone for the remaining football selection. I needed a Chelsea win. A last minute winner and I was over £200 up for the night! Not thousands of pounds but I was due to go away on the Saturday – spending money sorted!

How long have you been a tipster?

About 18 months, if I remember rightly. It was the start of 2015 when I found myself following a Facebook tipster. I read some very, very silly things on that tipping page.

The losing bets would suddenly be magically deleted from the page. Then I read: “it was the right bet but the goal never came”. That was the final straw for me! How ridiculous.

I don’t promise all of my selections come in. I’m not controlling the players like it’s a Playstation game! I just do my best with what I know / can research online / inplay stats / form etc. The list goes on.

But I’ll be honest when there’s a duff choice and the goal I need never comes, or the 25/1 away team score a last minute equaliser! It’s the name of the game. If you can’t handle losing your hard earned £10 on a gamble, then you shouldn’t be playing with that money. It’s all moderation. I don’t smoke. I don’t do drugs. I drink (in moderation). I eat fatty foods like the next person (in moderation). I enjoy a bet (in moderation). It’s all relative.

Anyway… This made me think that whilst I wouldn’t necessarily “do better” on my own, I could definitely research some selections of my own. And just maybe other people would be interested in seeing them too.

I had started my own Facebook page with tips which I had aimed at girls instead to show that it’s do-able no matter if you’re a mad footy fan “lad” or a woman! It was a moderate success for what I was trying to achieve, but then I found Twitter could reach such a wider audience. With such easier ways to contact me / view the bets / show the support with a like or re-tweet. It just made perfect sense. I soon closed my Facebook tipster page and migrated over to Twitter.

Why do you think there are relatively few women betting on football?

I think it’s mainly the reputation that betting can be a very bad thing. Of course it CAN. So can drinking too much Vodka or walking around in a lightning storm.

As an adult, you’ve got your own free choice and will be subjected to as much risk as you wish to be.

The fear of it becoming an addiction, the endless stream of betting adverts on TV during an ad break in the football, I think some women feel it’s too much of a pressurised thing. That feeling of going to work and earning £50 / £100 that day then wasting it all in a heartbeat trying to win more.

Maybe that they feel they don’t know enough of the sport to place a bet. But it’s all research. Do I know ALL about the team in the Peruvian 3rd division that I’m about to bet £5 on? Nope! Going by the stats do I think they’re about to concede? Yes!

It’s thought of more of a lads thing, they’ll be placing a bet whilst we’re taking in New Look shopping for dresses. I received a message only a couple of weeks ago, asking why I wasn’t “doing normal womanly things and concentrating on a family/career”. Whatever next! Before you know it we’ll be voting and driving.

Eugh, comments like that make me so mad. What do you think could be done to encourage more women into our community?

I think more and more women will be into sports betting once they see that if it’s kept “fun”, then it really can be good fun.

I was with a group of girls at the dog racing just before Christmas. £1/£2 stakes on something completely random as Greyhound racing. But did they enjoy it when they won £8.70 off that pound? Of course.

I’d feel uncomfortable going into Ladbrokes on the high street, I think a lot of women would. And I’d be looked at in a strange way by the regulars if I did so. But as more and more girls get into football (like after the women’s World Cup recently), I think it’ll filter down to enjoying a sports bet online also.

What are some of your favourite football betting resources online?

I use Betfair for my bets, I’ve had an account with all the top bookies at one stage or another but I’m definitely settled with what I like now! Who hasn’t gone around and milked some of their sign up offers! It’s your own preference at the end of the day but I know what I like. Often getting free bets in my email and special enhanced odds from Betfair, so I’m settled.

I do like livescore.com if I need a quick update on a score. And I have downloaded the SkyBet app for the live text updates / live pitch view even though I don’t use them for bet placement! Don’t need to be logged in to use it. Gives a clearer indication of the way a game is going by possession / shots etc. (Not that that always tells the full story of course).

I also Google a team I’m about to bet on, just to get their league table and current form / head to heads. uk.soccerway.com is a great site to get this quickly and easily.

If you could share one tip on football betting to our readers, what would it be?

Go with your gut feeling. I hate it when I’ve been looking at a game for ages, watching the stats, and I think… Both teams to will score here (for example).

I’ll then over think it in my mind, go somewhere else and choose another game I deem to be safer, or whatever reason seems to make sense at the time.

Then I’ll go back and check the original game an hour later, out of curiosity. Yep of course it’s a 3-3 goalfest whilst mine is in the 80th minute with 1 shot on target!

Don’t chase your bets. There’s always tomorrow / next weekend etc. We all have rubbish days and want to get our stake back. Let it go, you’ll get that good run or big win sometime soon!

Keep it fun, don’t bet an amount you’re going to badly miss if it does lose. Just call the team a bunch of mother duckers in your head, laugh about it inside how it’s “just your luck blah blah” and move on!

I never bet on “dead certs”. No such thing. Betting on ten 1/14 odds teams in an acca you know one (or two) are going to have a nightmare of a day! Not worth the stake in my opinion.

If there was one thing you could change about football as a sport, what would it be?

Zlatan signs for Walsall, we’re promoted, then he takes me on the holiday he promised me.

Maybe England players caring about their national side as much as they do their club sides! Not technically what you asked, and never going to happen, but I’d like that. Wear that badge with pride.

Thanks so much for doing this, is there anything else you would like to add?

I hope you enjoyed reading these ramblings as much as I did in writing them.

Thanks so much Becca, I had a great time interviewing you and I’m sure our readers will love what you have to say!