Who will win the EFL Cup?

The draw for the EFL Cup Third Round has been completed, with the Premier League’s top seven entering the fray. Who could win this competition? Here’s our tips. 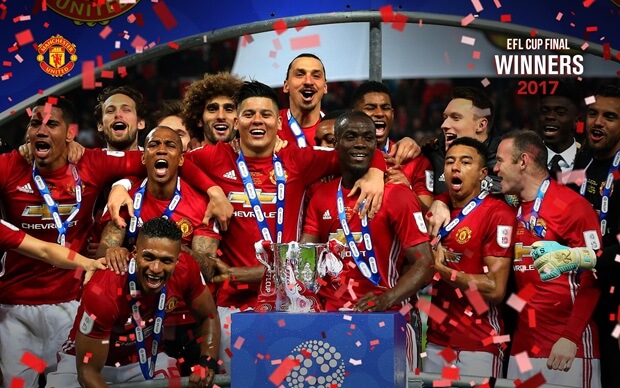 Jose Mourinho has won this competition in four of his six full seasons as a manager in England. He lifted the trophy last season, his first at Old Trafford, highlighting his intentions by picking a stronger side than Pep Guardiola in an early tie with Manchester City.

Any team Mourinho puts out should win in the Third Round against Burton Albion, who have a small, aging squad that will be facing it’s fourth game in 10 days. By contrast, United’s starting line-up in the 4-0 win at Swansea excluded many players of European pedigree. Sergio Romero kept countless clean sheets last season while Victor Lindelof, Chris Smalling and Marcos Rojo have all played at the top level. Then there’s Ander Herrera, one of the best midfielders in England last term plus Axel Tuanzebe and Ashley Young, who are good utility players. Zlatan Ibrahimovic, who has just penned a one-year deal with the club, will be a fine striker to bring in when resting Romelu Lukaku as Anthony Martial and Luke Shaw will be keen to prove themselves to the boss.

With the squad depth Manchester United have combined with the attitude Mourinho has towards the competition, it is easy to see why they are 11/2 favourites with Betway as of 24/8.

It seems unlikely that Leicester City will repeat their 15/16 title heroics soon, but they still have ambitions of finding a route back into Europe.

The squad they have might not yet be good enough to gate-crash the top seven over 38 games, but it might be good enough to win the League Cup over the next five. Success in this competition is reportedly high on the priority list for the owners, who will be pleased by the 4-1 win at Sheffield United on Tuesday night.

That came despite eight changes from the side that beat Brighton on Saturday. The only players to retain their places were Harry Maguire, who looks full of confidence, Christian Fuchs, who has proved his versatility and Wilfred Ndidi. The latter adds some of the midfield tenacity that the Foxes have missed in the absence of N’Golo Kante and his presence allows other players to get forward with more confidence.

The lightening quick Ahmed Musa and Demarai Gray did that to good effect in the second half at Bramall Lane. Both struggled for starts last season but have potential and could see this competition as an opportunity to prove themselves against potentially tired or untested defences. Islam Slimani, who scored a brace in the second round, has proven a good finisher when fit and could work his way back into Craig Shakespeare’s plans.

Leicester are 33/1 with Betway to win this competition as of 24/8. If they beat Liverpool in the Third Round, they could be a force.

Similarly to Leicester, West Ham United are a club with big ambitions. They are unlikely to go down this season, but will also struggle to qualify for Europe via the league format.

At a time of off-field tension following the stadium move last summer, winning a trophy could be key to kicking this new era into life. Supporters, who have not seen their club win a top tier trophy since the early 80s, are hungry for success and their team might have the quality to deliver it.

Sam Byram is likely to be start most EFL Cup games and is arguably a better option at right-back than Pablo Zabaleta, who has so far retained his place in the league. There is also an argument to say that Adrian San Miguel, the cup goalkeeper, is better than Joe Hart on current form while James Collins didn’t do himself any harm at Cheltenham.

Andre Ayew and Diafra Sakho weren’t given much of the ball in the victory at Whaddon Road, but they combined superbly when they did get it and have given Slaven Bilic something to think about. Cheikhou Kouyate, whose introduction improved the Hammers midfield significantly on Wednesday night, is returning from injury to add bite and dynamism. The delicate quality of Manuel Lanzini and Javier Hernandez could also come to the fore, as well as the pace and power of Michail Antonio in the latter rounds of the competition.

The Hammers are 25/1 to win it with Betway as of 24/8, but those odds could shrink quickly in the next month. Should they beat Bolton, who are struggling in the Championship, there will be between three and 13 lower league teams in the hat for the last 16. If they put in a professional performance and get a favourable draw, that 25/1 will look like excellent odds.

The Gunners’ track record in the FA Cup over the last four years suggests that they have a hunger to do well in the domestic knockout competitions.

They will be playing in the Europa League this season. On the one hand, this might give them more games than they play in the Champions League, which they habitually get knocked out of in February. However, their participation and likely progress in this competition means that their fringe players will have a lot of match practice, which could prove useful in the EFL Cup.

Although Arsenal don’t have as strong a starting XI as we saw in yesteryear, their squad has reasonable depth. Alex Iwobi has proven himself to be a bright, dynamic talent, Santi Cazorla is close to a return while Laurent Koscielny boasts bags of experience. While Jack Wilshere and Francis Coquelin have had a bad couple of years, they might see the EFL Cup as a final chance to prove themselves.

Olivier Giroud has been one of the more consistent front men in England over the last few seasons and with Lacazette starting up in the Premier League, his compatriot will almost certainly start in this competition. Petr Cech has not had the best of starts to the season, so potentially David Ospina, who is likely to start cup games, will be a better option.

Arsenal are 7/1 to win this competition with Betway as of 24/8 – those odds could hold some value.