Interview with Chris from Mondogoal

In an earlier blog post we mentioned that we were partnering up with Mondogoal to help provide you guys with access to an amazing fantasy football service.

I wanted to get chatting to one of the guys there to ask them some questions and Chris Mazzone was kind enough to agree!

Hey Chris, thanks for agreeing to to the interview, can you let us know a little bit about yourself?

I’m born and raised in the United States but my passion for football (or soccer as I knew it) came at an early age, playing pretty much as soon as I could walk. I’ve played and coached ever since. These days most of my time is dedicated to turning Mondogoal into a world wide phenomenon. My wonderful wife has been incredibly supportive, even though football related content is constantly on our TV or my computer screen.

So tell us a little bit about Mondogoal.

Mondogoal takes everything you love about fantasy football, everything you love about sport, betting and competition, and combines it into an amazing bit of fun/excitement that anyone can play at any time with no long term commitment. It’s modeled similarly to online poker in that you can log on any day, any time, and sit at a “table” of your choosing – make a fantasy team in just minutes for that day or just that matchweek, then walk away and enjoy the games on tv or in person. Watch your boys earn points for you based on how they play in their real life matches (goals, assists, tackles, passes completed, etc…). Follow along in real time on your computer or mobile and if your team scores the most fantasy points by the end of the day/matchweek, you take home the cash prizes. You no longer have to rely on another team to win you money. You essentially can bet on yourself every week in leagues ranging from head to head, to leagues with thousands of entries and bigger pot sizes.

How did you get involved with the site.

When fantasy sports started to take off as a viable business in the United States I was keen to get involved as it’s always been an interest of mine. The season long format switched to a one-day/one-week format about 4 years ago in the United States for their major sports. I hopped on board as an affiliate and brought in about 6000 users to my favorite US based fantasy site at the time. Once they received a sizable investment they graciously offered me a full time position. When the most recent World Cup came along, I stumbled across Mondogoal – won over £1000 playing in their World Cup contests and knew I had to be apart of it.

Great stuff! How have things been going since you started?

Fantastic! We have an incredibly talented team from our development to marketing support to our leadership team. With our CEO being the former Head of Digital at A.S. Roma we were able to get in the door at some of the top clubs in the world, impress them with our product and business plan and form long term partnerships. Anytime clubs like FC Barcelona, Liverpool FC, Manchester City FC, West Ham United, and A.S. Roma want to be apart of your product just months after launching, it gives you instant credibility and makes you feel pretty confident that you are on to something big.

What football team(s) do you support? 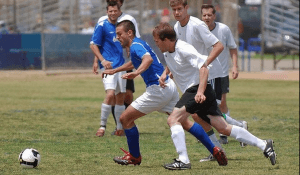 Growing up in the states I didn’t have much exposure to the Premier League. So, I picked my team very differently than those in the UK. In the late 90’s played a lot of EA Sports FIFA. Dennis Bergkamp, Marc Overmars, Freddie Ljungberg and later, Thierry Henry, brought me many victories. They wore red, they were called the Gunners and as far as I knew, they were unstoppable – particularly with me at the helm. My dad did some business in the UK and brought back a gunners hat and a “JVC” sponsored Arsenal kit which I still try to squeeze into now and again just for old times sake. The rest is history.

What is your favourite football moment?

It’s impossible to pick just one. I love the sport and still get chills listening to classic calls of heart-stopping goals in important fixtures. Of course there’s memories of my own glory days that I like to exaggerate and re-live as well.

One thing is for certain, this particular video, followed by this one will never, EVER get old. To the rest of the world it probably meant very little, but to us it meant everything and it turned a mood of utter disappointment into complete euphoria in a matter of seconds. You never can forget those moments.

Is there is one thing you could change about football, what would it be?

Obviously the embellishment/deceit gives the sport a bit of a poor reputation and it’s getting kind of old to still see so often.

Even so, thing that drives me insane is that if you take a throw-in and it never goes into the field of play, you get to retake it. If you can’t throw the ball into the field of play you don’t deserve a second chance. It’s a small ball, a big field, come on! I know, so trivial – and yet the one time a year I see it happen, I go nuts.

Haha, I have never known someone get annoyed by that throw-in rule before! What does an average work day look like for you?

We’re still a small team, in start up mode. So, we’re all contributing everywhere from working with our football club partners to finding new marketing partners, potential affiliates, monitoring the site performance, communicating with our users, finding ways to improve the product and learning more about our audience and how best to reach them and spread the word about Mondogoal. Every day is packed and I work from the time I wake up to the time I go to sleep because I love every second of it. We are an extremely dedicated team, making sure Mondogoal is going to be around for a long time.

Are Mondogoal working on anything great you can talk about?

Sure, aside from our recent announcement of our partnership with FC Barcelona we’re looking at adding a couple more clubs to our roster of Premier League/La Liga/Serie A teams in the near future. Beyond that we’re moving into Italy in early 2015 so we’ll be available for cash play and all our Italian fans can begin winning money in Serie A contests along with Premier League, La Liga, etc… We recently released this little advert with our partners at West Ham United where a West Ham fan actually won a Mondogoal contest for £1 and got to attend the shoot and meet the players. We are going to be having quite a few contests like that where you can win VIP experiences with our club partners, hospitality match tickets, signed shirts and footballs. Always something new and exciting to play for, along with our usual contests with thousands of pounds up for grabs each matchday.

Also, we’re working on putting together our first Mondogoal fantasy football world championship and awarding some significant cash prizes to the winner. People from the United States, Canada, United Kingdom, Ireland, Brazil, and soon Italy will all be able to compete to be crowned the first ever champion of Mondogoal. We’re still working out all the details but we believe our users will enjoy it.

Is there anything else you would like to add?

Just that I really encourage everyone to try us out, we have free leagues that you can compete in and win some cash just to help people get involved without any risk so they can see what we are about. Send feedback, we love hearing from our users and know there’s still a lot to be done. Lastly, and most importantly – tell your friends and tell us if you know people that can help spread the word about Mondogoal, we are always looking for new partners. It’s great that people want to keep us a secret and all to themselves, but the more users we have the more cash and prizes we can offer and the more exciting the game becomes.

Stay tuned, lots on the way – thanks for supporting us.