The first thing I saw on Facebook this morning through my sleep-filled eyes was a BBC headline, revealing that the plane carrying the Chapecoense team from Brazil to Colombia (via Bolivia) had crashed. I genuinely didn’t believe my eyes. I did wonder if I was awake or not, but after a short period of time, I realised that it was very real.

Now, I am not an emotional person; far from it. I’m known for being very composed and measured in everything that I do, enough so for an old friend to have once humorously dubbed me “fish blood”. However, the sheer devastation that this disaster has caused would not leave my mind. The people left behind – family, friends, opponents, rivals, and even some players that did not travel. How do players begin to move on from such? I do not envy such a task. Reports suggest that three of their first-team players survived the crash, and two non-playing personnel survived too; everybody else died. It’s absolutely galling. I’ve seen the below photograph circulating social media, and thought it was very poignant to post it to impress upon you precisely what has happened today. 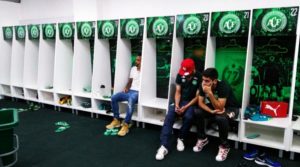 I remember (from reading; I wasn’t alive for either) two other horrendous air disasters, namely the Munich Air Disaster and Il Grande Torino, in which Manchester United and Torino respectively suffered irreparable damage. I thought we’d reached a stage technologically where things like this wouldn’t happen anymore, but clearly I was wrong.

I remember thinking about the Atletico Nacional de Medellin vs Chapecoense fixture at weekend as I wrote my preview for Palmeiras vs Chapecoense. I genuinely didn’t think that they stood a chance of winning it, but admired the fact that they’d somehow fought their way there past the likes of San Lorenzo de Almagro and Independiente. They had no realistic right to expect to beat the reigning Copa Libertadores champions in their own backyard in the Copa Sudamericana final first leg, but that didn’t deter them. Chapecoense had a lot of belief, and fair play to them for that; it’s extremely difficult to simply “beat” belief.

There will be a lot of media coverage in the coming days, no doubt scrutinising the safety of plans whilst people look for somebody to blame. I’m not getting involved with things like that because they’re entirely counterproductive right now. All I wanted to say was how sorry I was that this tragedy has occurred. It’s the first football air disaster that I have seen in my lifetime, and it’s truly going to resonate with me for a long time, particularly the harrowing photographs of a charred Chapecoense emblem on the plane that had crashed.

One more thing. I’ve often labelled the South Americans as nutcases on the pitch, because they are. South American derbies are unlike any others I have witnessed. I remember watching a pre-season “friendly” between Uruguayan powerhouses Penarol Montevideo and Club Nacional de Montevideo a few years ago, and at least three players were sent off in the first-half alone! However, that passion of theirs has positives too, and one of them is that now the whole of South America has stood still as one, remembering the players of Chapecoense. CONMEBOL have cancelled all games today, and Brazil have announced that there will be three days of mourning. Furthermore, Atletico Nacional de Medellin, Chapecoense’s would-be opposition, have made an unbelievably generous offer to award the Copa Sudamericana title to the Brazilian team. I don’t think that gesture should be overlooked because Atletico Nacional de Medellin fought hard to be in this final too; they deserved to be here. To freely offer to give that up is extremely respectful and magnanimous of them, particularly when you consider that they’d have won both South American continental competitions in the same calendar year had they kept hold of it. Personally, I believe that both teams should be awarded the win, but I’ll leave that up to the governing body.

This was a horrible, horrible thing for everybody to see. It’s far worse for the poor people involved, I am sure. I can’t say anything cliché here about religion, or thinking of people involved, because that stuff tends to annoy me. All I will say is that I have an awful lot of respect for what Chapecoense achieved, that I will not forget this day, and that I will not forget how football stands together in the toughest of times.

"Are you gonna bark all day, little doggy, or are you gonna bite?" –– Ian is our expert tipster, with over a decade of experience analysing and betting on football