Corner betting: how to assess the market value

There has been an exponential rise in the number of betting markets available over the last couple of years and this has significantly increased the options for the average punter. As well as wagering on the outcome of the contest, corner betting has proved to be a popular addition and savvy bettors tend to make a steady profit from these markets. It requires an understanding of the tactics and style of play as well as predicting the flow of the game. We look at the kind of matches which could be potentially profitable when it comes to corners and pick out some teams who should be followed closely.

Corner statistics are widely available online, which makes it easier than ever before to bet on this increasingly popular market. The average game in the top flight produces between eight and eleven corners, although there are always likely to be anomalies. Manchester City amass an average of 7.71 corners per game and they are always a side to follow when it comes to these markets. Pep’s side command plenty of possession and tend to dominate games against lower-ranked sides and this results in a high number of corners. They chalked up eleven during their 2-1 success against Watford at the beginning of December 2018 and they also achieved a similar total against Brighton, Burnley and Fulham earlier in the campaign. There can often be discrepancies but their lowest totals have tended to be against fellow top six sides (Spurs and Liverpool) or against teams who sit extremely deep and play for a point (Newcastle and Manchester United).

In the Scottish Premiership, Rangers are a very profitable side to follow, particularly at Ibrox. 88% of their home games this season have produced at least ten corners with the only exception being their opening day fixture against St.Mirren which ended on nine. Despite only beating Hamilton by a single goal on December 16th, Rangers amassed an unprecedented 22 corners, which roughly equates to one every four minutes. A high possession count will always contribute to plenty of chances and, as a result, a large number of corners. Steven Gerrard’s men are top of the table and have made an impressive start to the season. They are above Celtic yet can still be backed at 9/2 in the latest football betting markets to clinch the title this year. There are plenty of corner markets available on Rangers’ games and these should always be considered whenever they come up against lower-ranked sides in Glasgow. 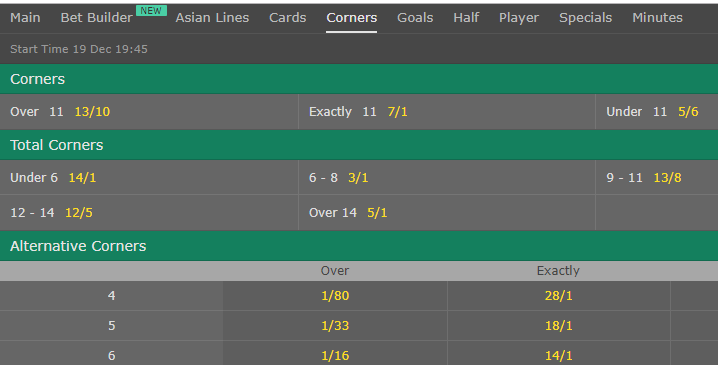 Other European outfits such as Ajax and Inter Milan are also sides who tend to play with plenty of width and can generally be relied upon to accumulate corners throughout the course of the season. It is advised to ignore domestic statistics when it comes to European competitions as the opposition will often be tougher to breach and fewer one-sided games are likely to occur.

Always focus on sides who play with natural wingers as this is likely to result in a fair amount of corners. Teams such as West Brom have been playing with inverted wingers during the 2018-19 season and understandably, their corner count is extremely low. Avoid managers who tend to deploy strikers in wide positions as they aren’t necessarily a natural fit for this role and don’t get to the byline as often as natural wide-men.

There isn’t a tried and tested system for betting on corners but assessing the flow of the game can help plot potential wagers. Look for one-sided games and focus on sides who enjoy using the full width of the pitch and this should help you make wiser decisions when it comes to betting on the corner markets.