Yesterday I previewed World Cup groups A-D, and with 24 hours to go until the biggest tournament of them all kicks off, I take a look at the remaining 16 teams and preview groups E – H.

If you are a member of our site, don’t forget you can also access Ian’s World Cup Preview. 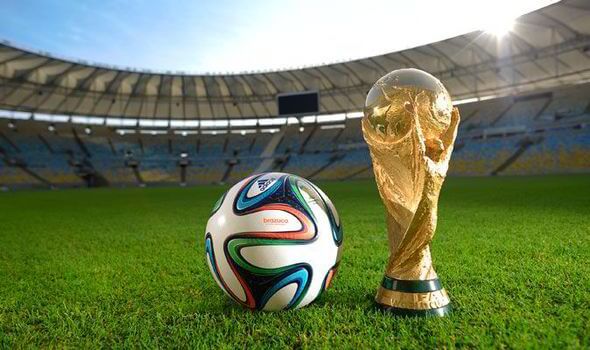 France may have struggled to qualify for Brazil, as they overcame a 2-0 deficit in the European playoff against Ukraine, but they’ll certainly fancy their chances of qualifying from group E. The loss of star man Frank Ribery will no doubt have an impact on the squad, but there is still enough talent in the team as highlighted in their recent 8 – 0 thumping of Jamaica. France will be relying on the likes of Benzema, Pogba and Cabaye to provide the spark, but they have a solid defence and great goalkeeper in Hugo Lloris, who can also have a big impact on any French progression in this competition. Keep an eye out for the extremely talented Antoine Griezmann of Real Sociedad, a player who has caught the eye in La Liga in recent years. France start their tournament against Honduras, and while the Central American outfit battled to a 0 – 0 draw with England in a recent friendly, I think the French will be too strong for them in this opening fixture. France are 6/5 -1 goal with Sky Bet and 8/13 to keep a clean sheet; both great bets in my opinion.

The opening game in this group see’s Switzerland take on Ecuador. Switzerland have come in under the radar for the competition and are actually the top seeds in the group and currently ranked 6th in the world. They are a well organised team playing great football under the guidance of Ottmar Hitzfeld. They are seen as the golden generation and this World Cup may have come a little early for them to make any noticeable impact. They had arguably the easiest of all European groups in qualifying and come to Brazil with players like Napoli’s Gokhan Inler, Granit Xhaka of Borussia Monchengladbach and the golden boy Xherdan Shaqiri of Bayern Munich.

Expect them to play some attractive possession football, but I do fear for them in front of goal. Switzerland beat Spain in the opening game of South Africa 2010 but failed to go on and qualify from their group. They are best priced 4/6 to qualify and I think it will be tight between them and Ecuador for second place. Ecuador’s home form was the main reason for their qualification, and without too many household names, expect Antonio Valencia to be the driving force behind this team. The conditions may suit Ecuador, but like Switzerland, they could struggle for goals. I don’t expect too many goals in this first game and a draw at 21/10 is appealing.

I can see France topping this group and Honduras struggling to get any points, and the battle will be between Switzerland and Ecuador for second place. The ability of Shaqiri and Xhaka has Switzerland as slight favourites for me and I think they will progress with the French. 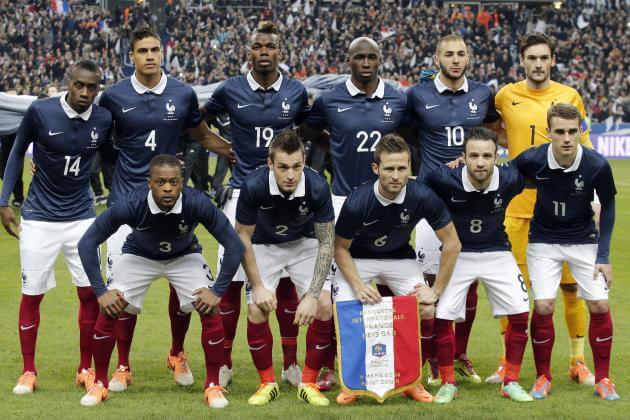 Argentina go into the World Cup as one of the favourites, and with a squad that includes Messi, Aguero and Higuain, it’s easy to see why they are hotly fancied by many. If I was given a free bet for the competition, I’d be putting my money on Messi and co, and I can’t see anyone in group F causing them any real problems. Bosnia are their opponents in the opening game of group F and the European side averaged 3 goals per game in the European qualifiers, mainly thanks to star man Edin Dzeko. Miralem Pjanic will be the other player that Bosnia will pin their hopes of qualification on, but I can only see one winner in this opening game and expect Argentina to do so in style. Two bets that appeal to me for this game is Aguero to score anytime at 7/5 with Bet 365, and Argentina -1 goal at 5/4 with Bet Victor.

The second game in group F is the not so glamorous match between Iran and Nigeria. Iran topped their Asian qualifying group and they proved a tough nut to crack, conceding only 2 goals. It’s in attack where they could struggle though as they only managed 8 goals in 8 games in the final qualifying stage. The most recognisable name in the Iran squad is Fulham’s Ashkan Dejagah, but I think Iran will struggle to make an impact in this group. Nigeria showed glimpses of what we can expect from them in last year’s Confederations Cup when a youthful side impressed. They have a mixture of youth and experience in the squad this time round and I can only see one winner in this opening game. Nigeria are best priced 5/4 to win this opening match and that’s where my money will be going.

I fancy Argentina to comfortably qualify from this group, and the best price of 2/9 reflects this. The battle for second place will be between Nigeria and Bosnia, and while it may only be their first major tournament, I just feel Bosnia will have too much for both Nigeria and Iran and they could even cause a surprise in this competition. Bosnia are best priced 4/5 with Bet Victor to qualify. 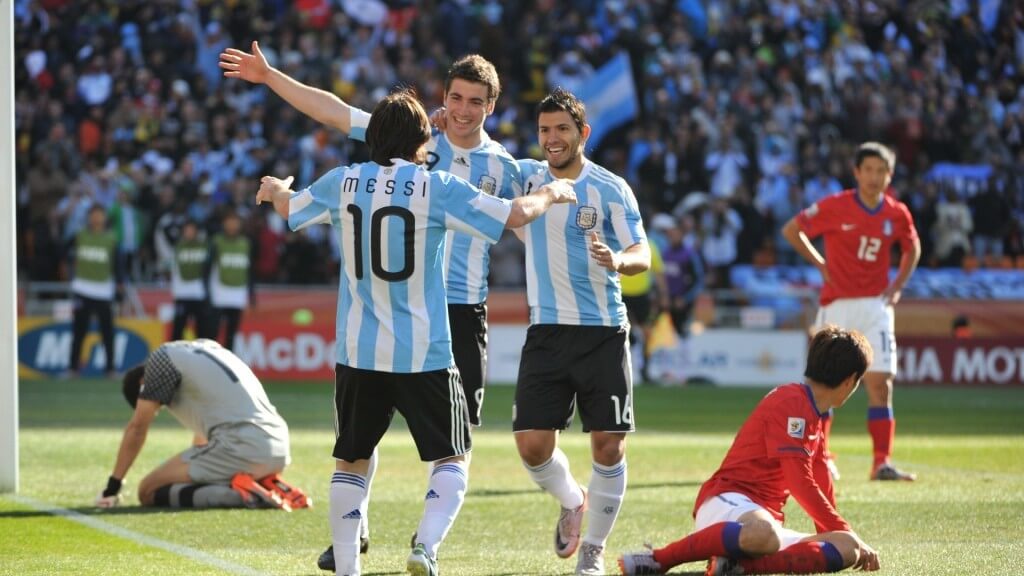 Group G promises to throw up some exciting games with Germany, Portugal and Ghana all looking to progress further than they did in South Africa. The first game in this group promises to be a cracker as one of the tournament favourites Germany take on Portugal, and Cristiano Ronaldo. Germany were impressive in qualifying as they dropped only 2 points on their way to Brazil, and have a squad that is littered with talent. While Marco Reus was recently ruled out with injury, the German midfield has no shortage of talent, with Ozil, Goetze, Schweinsteiger and Draxler all expected to catch the eye. They will be up against it though against Portugal, who’s progression in the competition will depend a lot on the fitness of talismanic captain Ronaldo. I will also be interested in seeing William Carvalho, a young player who has caught the eye at Sporting Lisbon this year. I imagine this first game to be a tight affair which neither side will want to lose. I think Germany will just edge it though, and are best priced at 5/4 with Paddy Power.

The second game in this group should be an interesting affair as an exciting Ghana side take on an efficient USA who are coached by Jurgen Klinsmann. Ghana were a Luis Suarez handball away from reaching the semi finals in South Africa four years ago and they’ll be aiming to qualify out of the group. The Black Stars as they are affectionately known, boast some great players including the Ayew brothers, Michael Essien, Sulley Muntari, Asamoah Gyan and the eccentric Kevin-Prince Boateng. The United States arrive in Brazil with a mix of European and domestic based players, but I think they will struggle to progress from this group. I fancy Ghana to emerge victorious from this first game and it could really set them up well to qualify for the second round. Ghana are best priced 8/5 to win this opening game.
For me, the crunch game in this group will be the final group game between Portugal and Ghana, and while I don’t think Portugal are a one man team, a lot will depend on the fitness of Ronaldo here. If he is fully fit I would fancy Portugal to progress in second place. If he is struggling, Portugal could also struggle. Either way, this promises to be another exciting group with some great games. I’m going to stick my neck out here and go for Germany at 8/13 to top the group and Portugal to just pip Ghana to second place at 4/9 with Ladbrokes. 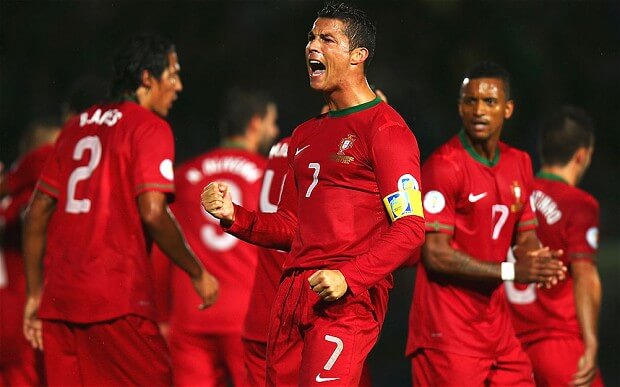 Perhaps the least glamorous of all the groups, the one thing that is attracting a lot of attention to group H is the talented Belgian side. With 12 of their squad based in England, this Belgium side is full of household names including Kompany, Hazard and Lukaku. They also boast the exciting Adnan Januzaj in their ranks, and they are hotly fancied by many to progress. This team is seen as the golden generation back home in Belgium, and with Germany in group G, you would imagine they will need to top this group to have any hope of advancing far in this competition. The quarter finals will be the minimum target for this side, as they aim to emulate the great Scifo Belgium side of the 90’s.

First up for Belgium is Algeria and I can only see one winner here. Belgium are best priced 1/2 to win, and 6/4 – 1 goal with Sky Bet. Eden Hazard will be the driving force of this team and he is 2/1 with Bet 365 to score at anytime in this game, not bad odds considering he will be on all set pieces. As for Algeria, they will be hoping to put in a better showing than they did 4 years ago when they only managed to get one point. They have some talented players in their ranks and a lot will be expected of Feghouli and Yebda if Algeria are to have any hopes of reaching the knockout stage.

The second game in this group is the battle for second place in my opinion and it will be interesting to see who hits the ground running between Russia and South Korea. Russia have really struggled to make an impact on the global stage and with all of their players based in Russia, they will come into the World Cup as a bit of an unknown quantity. They topped their European qualifying group which included Portugal, but suffered defeat to Northern Ireland along the way. They are currently ranked 19th in the world, some 38 places above South Korea. South Korea reached the last 16 in 2010 and they will be hoping to repeat this in Brazil. There isn’t too much known about the Koreans, but Ki Sung-Yueng of Swansea and Son Heung-Min of Bayer Leverkusen are two players to keep an eye on. I expect this opening game to be a low scoring and tight affair as neither team will want to open up with a defeat. The draw at 11/5 here could be worth a punt.

I really fancy Belgium to go far in this competition and can see them at least reaching the quarter finals. I can see them topping the group here with 3 wins and the battle for second will be between Russia and South Korea. While Russia have looked decent at times in qualifying, I fancy South Korea to cause an upset and progress as group runner up at 7/4. Belgium are best priced 8/11 with Sky Bet to top the group.

Who do you think will qualify?

Do you agree with my predictions for groups E to H? Who do you think will qualify and do you think there will be any surprises? Let me know by commenting below, or join the conversation with us on Facebook and Twitter.

Keep an eye out for our preview of the later stages of the competition where I will review my initial predictions and take a look at the teams and players that have caught the eye in the group stages.